Side Hustles, Liquidating 401(k)s: Here’s How Jobless Californians Are Getting By Without The Extra $600 – Capital Public Radio News

Since the federal weekly $600 boost expired last month, unemployed Californians have been living on impossibly low budgets — and expect to do so in the coming months even if President Trump’s weekend executive order helps break a partisan impasse in Congress. That’s because even if the federal unemployment stimulus gets extended, the state Employment Development Department estimates it could take the agency’s antiquated system as much as 20 weeks to deliver the payments.

Overnight, the maximum insurance benefit fell from $4,200 every four weeks to $1,800 — below the federal poverty line for a family of three. The loss of the boost is not the only rug being pulled from under the feet of nearly 1 million California renters who lost a job because of COVID-19.

On Aug. 14, a statewide moratorium on eviction will expire, leaving many vulnerable to homelessness if they’re late on rent. State lawmakers and Gov. Gavin Newsom are scrambling to find a legislative stopgap, but it is unclear whether several proposals currently being negotiated in the state Legislature will be completed in time.

Here’s how the loss of expanded unemployment benefits has impacted four Californians — and why pressure mounts in Washington, D.C. and Sacramento to act.

Raising a newborn during a pandemic — on $10 an hour

This is not how Jessica Gallup, 37, thought the first five months of her daughter’s life would go.

She never imagined she’d be a stay at-home mother. Rather, after eight weeks of maternity leave, she planned to go back to work as a corporate event coordinator, a career built over 21 years that seemed to crumble in the time it took her daughter to be on the verge of crawling.

Gallup spent most of her baby’s first months calling the state’s unemployment agency over 3,600 times, by her count, to help resolve her unemployment claim. Without any income for eight weeks, she drained her savings. 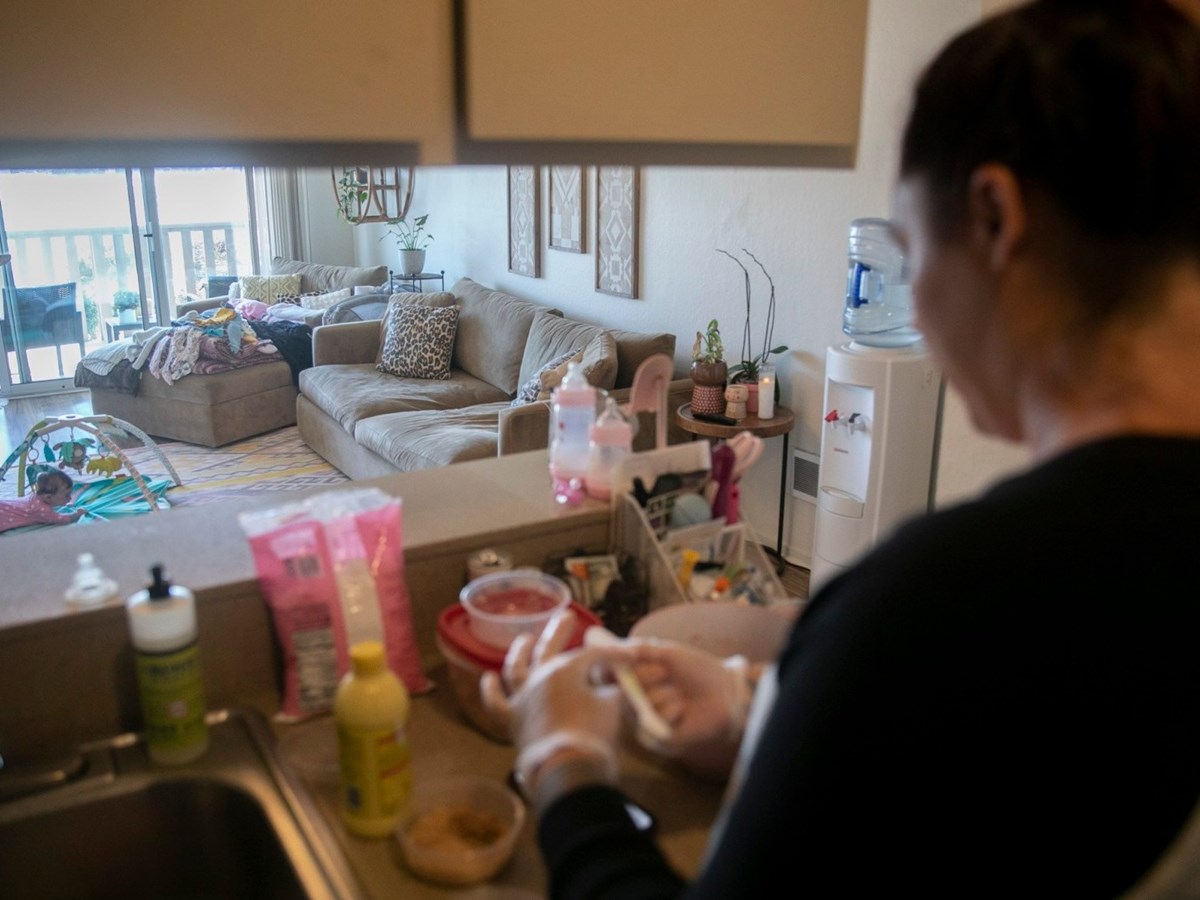 If not for two months of rental assistance from a local YMCA, Gallup said she’d be short thousands of dollars for her $2,400 one-bedroom apartment in South San Francisco when the eviction moratorium ends.

Gallup’s determined to stay positive for her daughter’s sake. She started selling home-made candy that she grew up eating in Hawaii to make up for the disappearance of the $600.

She asks herself these questions: Should I move to a lower-cost state? Should I try to find “essential” work? Perhaps switch careers to the medical field? Can I find a job that won’t disappear, leaving my livelihood in the hands of state and federal lawmakers?

Hopeful that the state will come through

When Heather Stockwell first moved to Los Angeles, she was homeless, alternating between couchsurfing or sleeping in her car.

Four years later, the 42-year-old had found stability. Now an event audio engineer, she’d found a rare deal in Los Angeles: a $900 room in a house shared with her landlord.

She realized everything was about to change during her last big gig before the shutdown — a tech conference planned for 250,000 people. Only about 20,000 showed.

Her company continued paying employees the first month of the shutdown. Then she was furloughed. Then the company stopped paying health insurance.

Stockwell liquidated her 401(k) and funneled the weekly $805 she got in unemployment benefits to her housemate to buy food and pay his mortgage. She found a silver lining: finally, she has long stretches of time to work on songwriting, to find poetry amid a pandemic.

Now, with the disappearance of the federal $600 boost, Stockwell’s down to $820 a month in unemployment benefits, which doesn’t cover rent. Stockwell considers herself fortunate: with her housemate’s word that he won’t kick her out — “I would be homeless if it weren’t for him” — she watches as a nearby vacant lot fills up with tents.

She said she doesn’t think state lawmakers will leave Californians high and dry.

“They have been talking about giving Californians the $600,” Stockwell said, referring to reports that Democratic state legislators are considering a state supplemental unemployment benefit.

“That gives me hope. California is the fifth largest economy in the world. They don’t need to wait for the rest of the country.”

@GavinNewsom thank you for your briefing. Since CA is one of the largest economies in the world. Would you please consider giving everyone $600 a week to everyone making under 70k a year, until the cornavirus settles down.The next 6-12 months.

Robert Huweiler, 57, kept the anxiety of living in a pandemic to himself. A round-the-clock caretaker for Sandra, his 79-year-old immunocompromised mother with severe Alzheimers, he knew she wouldn’t understand or remember.

Ironically, it wasn’t COVID-19 that ultimately took his mother’s life in early June. It was sepsis from an undetected urinary tract infection. But the fact that he wasn’t able to be at her side due to the hospital’s coronavirus precautions still fills him with guilt. Nightly, his mind circles around one question: Had he been at her bedside to advocate for her, as he had for the past decade, would things have gone differently?

For the past year and a half, the state had paid him $13.50 per hour to take care of her. The income had allowed him to buy a new car. (She’d ask, “Who’s car is this?” and he’d answer, “You helped us buy it, Mom!” She’d smile, “Oh, I did?”) For her, he had bought an electric chair to carry her down the stairs from their second-floor apartment in San Diego’s Bay Park neighborhood.

Huweiler said his unemployment deposit — the weekly max of $1,050 — came within a few weeks. The $600 boost, however, was short lived. Starting last week, he receives just $1,800 per month.

That’s a total of $2,234 per month, and he’ll have to make up the difference somehow. Returning to salon work seems unstable, and potentially dangerous.

“There’s a lot of fear of even entering the workforce,” Huweiler said. “Is it safe? Are there even any jobs?”

Please continue to stand up for the unemployed who have actually been able to survive on their benefits — Thanks to the $600/week federal unemployment benefit — A cut to $175-$200/week will severely hamper ones ability to survive.

‘Is there a lottery that I’m not a part of?’

For Forrest Batson, 34, the loss of the $600 feels purely theoretical. Part of the state agency’s backlog of 1 million unresolved unemployment claims, he has yet to receive any of the federal bonus payments.

A downtown Los Angeles chef, Batson filed for unemployment days after the statewide shelter-in-place order. After weeks of silence, he got through to an EDD representative who informed him that his benefits were stalled by an alleged false statement he had made on a prior unemployment claim that resulted in overpayment. Batson was flabbergasted; he’d never been notified.

He began receiving $167 a week in federal aid for freelancers and others who didn’t qualify for regular assistance in late April. However, he said EDD representatives told him that the agency won’t delay benefits for past false statements during the pandemic, yet his account remains mysteriously pending, and he hasn’t received the money.

“Is there a lottery that I’m not a part of? This is a livelihood,” Batson said.

Newsom announced 5,300 temporary hires and appointed a “strike team” to help the EDD get through the backlog before the end of September, but 61 legislators told Newsom in a scathing letter last week that his promises didn’t nearly go far enough.

So Batson isn’t holding his breath for the extra $600. Though he’s been able to go back to work with reduced hours, “every other second we’re on the edge of another shutdown so I’m being told to prepare,” Batson said. He has dipped deep into savings. His plans to start his own catering business or move into a bigger place with his girlfriend will have to wait.

What stings most, he said, is the way he’s been treated by EDD representatives: hung up on, yelled at, and told conflicting information from one phone call to the next.

As for the $600, Batson said, “I haven’t even been able to experience the luxury of this extra money.”