Having the (money) talk: Teaching kids the dollars and cents of personal finance – Jersey’s Best 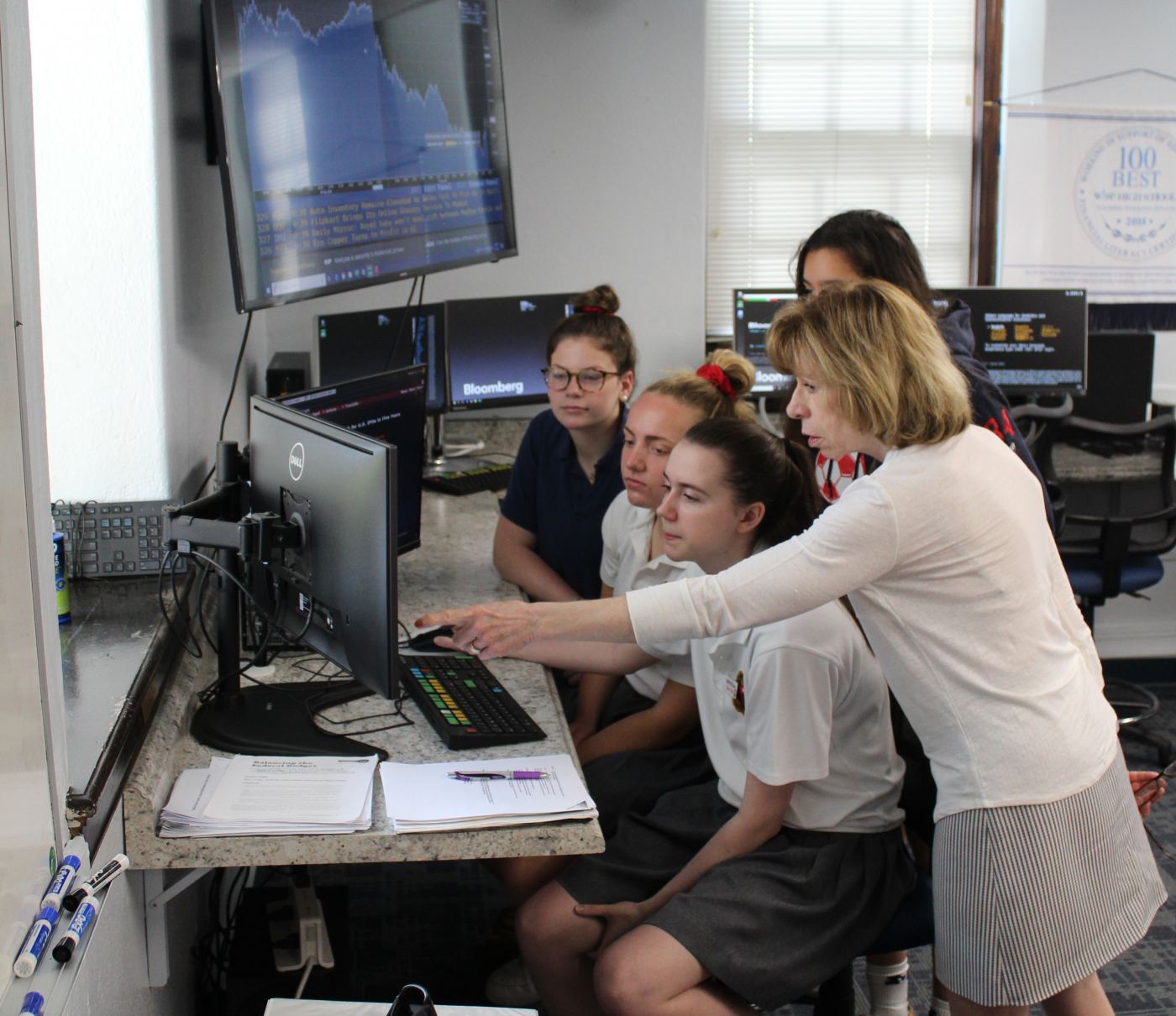 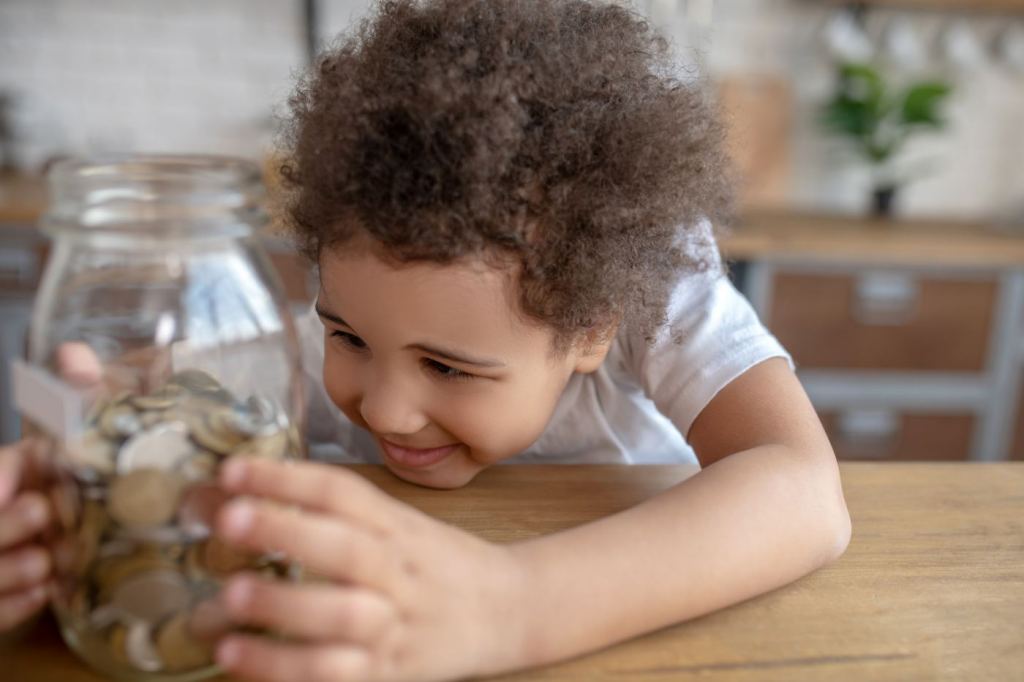 During this period of financial instability, it’s more critical than ever to teach kids the importance of making good economic choices. Photo courtesy of Getty Images

For many parents, sitting down to discuss the birds and the bees with their kids is way easier than talking about the dollars and cents of personal finance. But during this period of financial instability — with unemployment at an all-time high and markets deeply fluctuating — it’s more critical than ever to teach kids the importance of making good economic choices.

“It can be such a difficult subject for parents to talk about, particularly if they are struggling to make ends meet,” said Kathleen Brennan, who has been teaching financial literacy and economics to her students at Mount Saint Mary’s Academy in Watchung for 20 years. “You don’t want to worry your children, but yet you want to make them aware that they need to learn to live within their means.”

The pandemic is “the ultimate teaching moment” for sharing with children the importance of having an emergency savings account — and saving in general,” said Joseph DiFiglia, executive director of the New Jersey Council for Economic Education (NJCEE) at New Jersey City University (NJCU). “There’s no real secret to this — it’s spending less than you make and paying your bills on time.” 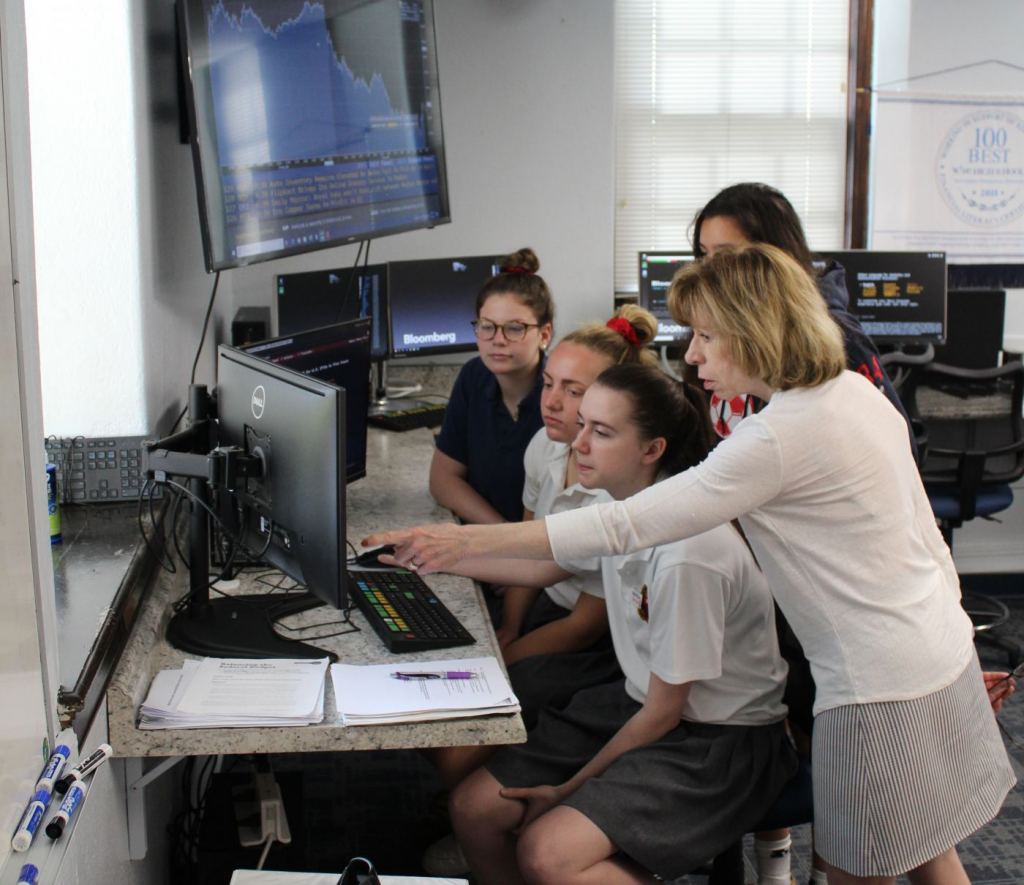 Kathleen Brennan has been teaching financial literacy and economics to her students at Mount Saint Mary’s Academy in Watchung for 20 years. Photo by Brian Vagnini

In fact, well before the pandemic struck, New Jersey had implemented mandates requiring both high school and middle school students to receive financial literacy instruction. The NJCEE provides professional development to K-12 teachers to give them the tools they need to help students meet the state requirements with a curriculum developed by the national Council for Economic Education.

But the pandemic has created a situation where the worst-case scenarios that teachers often warn students of — like the loss of a job or not having enough money to retire — are playing out in real time as many adults who did not see the importance of budgeting, saving and investing are taking a big financial hit, unable to pay bills or put food on the table.

“The younger you start developing good habits and saving money, the better off you are,” said DiFiglia, who’s also an adjunct professor at NJCU after retiring in 2012 from the Red Bank-based investment company he founded. “I’m a big believer in forming good habits and taking personal responsibility, which will reward people down the road,” he said. 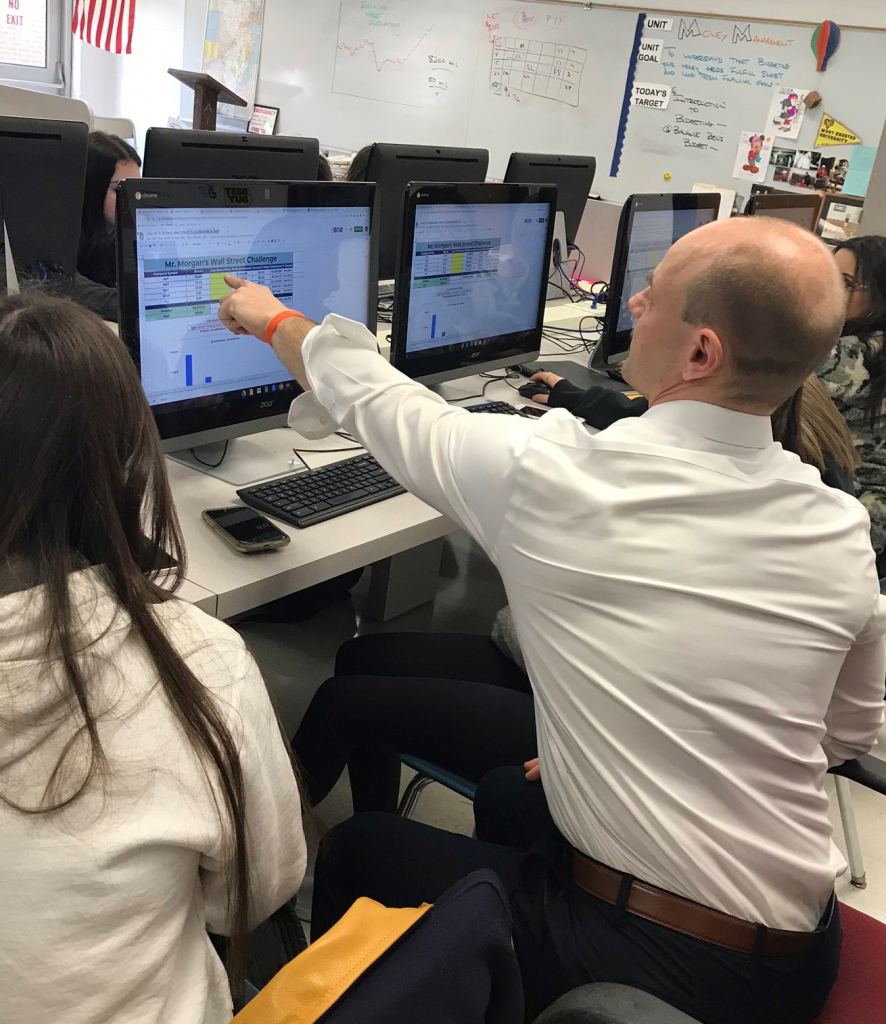 Kevin Morgan, who teaches financial literacy classes at Marlboro High School and is a facilitator with NJCEE, says he’s amazed by all of the people who have been relying on their stimulus checks and tax refunds to help them get by. “It speaks to the importance of paying yourself first,” he said, “which means making sure you are saving, investing and building an emergency fund — all of which takes time.”

When students walk into his classroom at the beginning of the school year, Morgan said he begins by welcoming them to “the most important class they’ll take in high school.” He said this isn’t to discredit all the other important classes they’ll be taking but because, unlike chemistry and algebra, “Financial literacy and economics are every single day of your life.”

While both Brennan and Morgan work with high school students, they stress it’s never too early to start speaking with kids about money. Following are some tips that can help parents start talking to their children about money, no matter how young they are.

Financial Literacy 101 For Kids At Every Age

Children as young as kindergartners can be introduced to the concept of good decision making, said DiFiglia, who compares the concept to learning about healthy nutrition. “Of course, we know the celery sticks are better for us, but we always want the donuts,” he said. Children need to learn the value of delayed gratification, which has been tied to a number of positive outcomes later in life, including higher SAT scores, greater academic confidence, healthier weight and better coping skills to deal with stress and anxiety, according to the American Psychological Association.

“If we can expose younger people to the consequences of these decisions at a younger age and provide them with the tools,” said DiFiglia, “they’ll be in better shape down the road.”

It’s hard in today’s consumer-based culture, observed Brennan, where advertising is turning everything from a want into a need. “It’s important for students to understand that life is about choice and trade-offs, and you always measure benefits and costs in whatever you do,” she said.

Money In The Bank

One of the best ways to start talking about money with kids is by helping them set up a piggy bank to allow them to learn the value of saving. “The earlier you start, the better you are,” said Brennan, who would encourage parents to help their child put money away toward the video game, karaoke machine or whatever it is they’ve been begging for.

By encouraging them to put money away toward its purchase, Brennan said parents give their children autonomy and teach them the value of saving for a rainy day. “All those concepts are important to impart to our children early on, particularly in a pandemic where we’re still not sure how we’re going to come out of this,” she said. 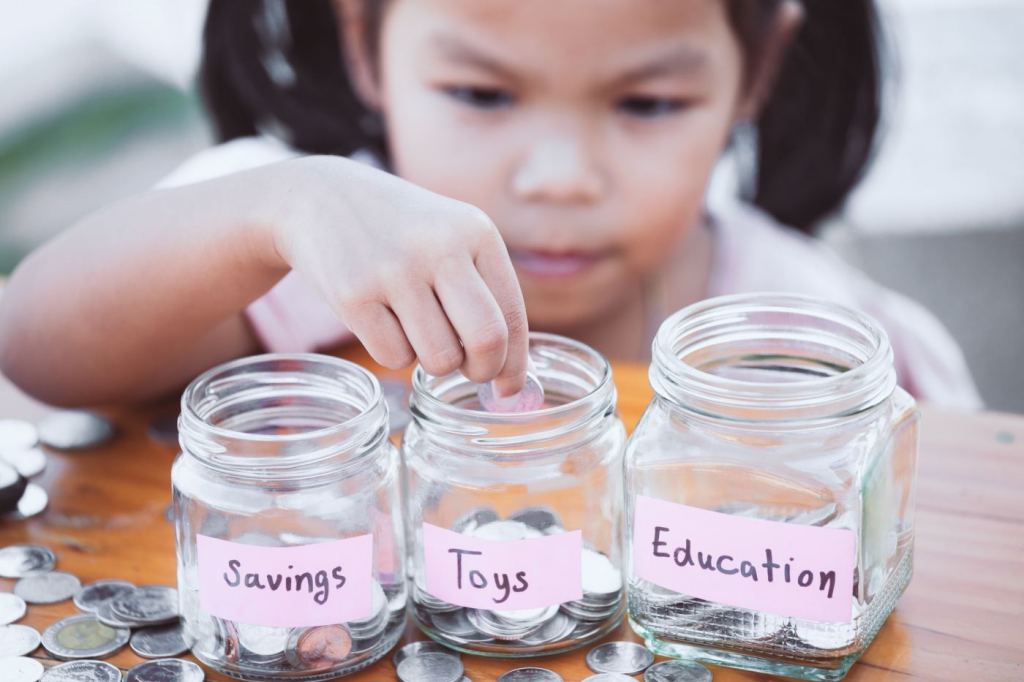 Parents give their children autonomy and teach them the value of saving for a rainy day when they let their kids put money toward an item they want for themselves. Photo courtesy of Getty Images

Brennan, who’s also a facilitator for NJCEE, is an advocate for giving children regular allowances, especially when they’re tied to chores that help them recognize the satisfaction of getting paid for work. “It’s empowering for a child to make his (or her) own money and helps him (or her) gain a sense of independence by not having to rely on somebody else,” she said.

One exercise DiFiglia does with middle schoolers is to get them thinking about household expenses, in particular how much it costs to own a pet. “Everybody wants a puppy, but then you start adding up how much it costs,” he said.

As we move further toward becoming a cashless society — especially while trying to minimize contact during a pandemic — kids have less of an opportunity to tie purchases to the items’ actual value. “They just see us swiping our cards when we go to the store,” Brennan said. “When you don’t have that physical counting out of cash, I think kids can lose track of what they’re spending.”

Another important lesson is to explain the differences between credit and debit cards to kids, and that the former is really just a loan that should be paid back in full at the end of the month, Brennan said.

The Reality Of College Debt

It’s almost as if all the tips above were really just training for one of the biggest decisions high school students will make, and that is whether or not it’s worth taking on debt to pay for college. According to the U.S. Department of Education, average student loan debt clocks in at about $32,731 with an average monthly payment of $393.

One of the first things Morgan does with his students each year is to perform an interest inventory and career outlook to get them thinking about jobs that interest them. “We say, ‘Follow your passion. Follow your heart,’ but in an economy like this, you may be put out of work,” he said. “We address what type of occupations will be able to weather financial storms.”

Brennan has her students look at Bureau of Labor Statistics data to see likely entry- and mid-level salaries for their chosen future professions and to consider whether it’s worth taking on $75,000 worth of debt when they’d only be making $30,000 annually. “It’s eye opening for them to see that a college degree doesn’t mean you come out making $100,000 a year,” she said.

“Not everybody wants to be a coder, but it’s important to go into it with your eyes wide open,” she said. “There’s more to life than racking up a big paycheck, you have to be happy.”

Whether your child is 6 or 16, it’s never too early — or too late — to start talking to them about money and making good choices so that in times of crisis, they’ve got a strong financial system in place.

“This is all about making good decisions,” DiFiglia said. “A dollar spent today is a dollar you don’t have tomorrow.”